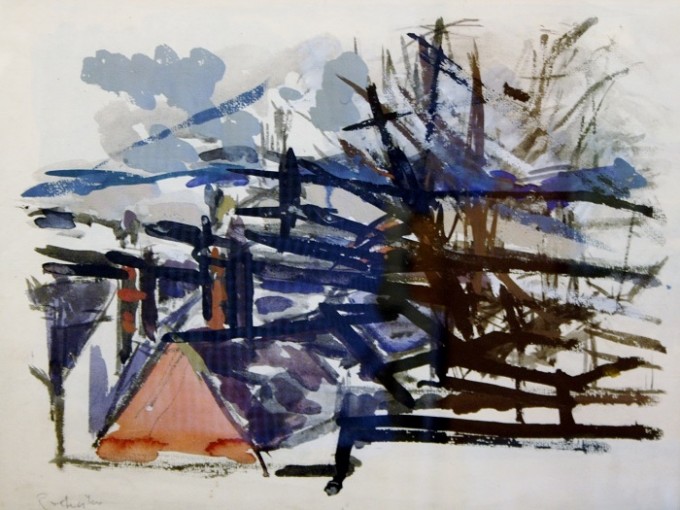 Nicholas Horsfield was born in 1917 in New Malden,Surrey, the son of a naval officer. Hewas educated at Charterhouse, a public school that was fairly enlightened towards the arts, he was put in a class for boys who did notfit into a career pattern. When discussing his future with his form teacher his suggestion that he join the army was met with hilarity. Art College it was then he started at the Royal College of Art, just before his eighteenth birthday. He found it tough, but his potential was recognised and much to his astonishment he was awarded a prize by Herbert Read. On finishing college he rented the upper floor of a barn near Guildford.Tragically there was a fire, and he lost virtually all his work. After this he took a job teaching English at a Berlitz school in Leipzig.

During the World War II Horsfield joined the army and served in India and Burma. In 1946 he took up his brush again, and worked from a back room at his mother’s house in Rochester, and found that pictures would come together in the final session. But he lacked the confidence to search out a dealer.

In 1948 he moved to Manchester to work as the Arts Council Regional Officer for Visual Arts. He relished the opportunity to meet other artists. He knew Lowry, and found him to be a wise and balancing influence. He felt particularly at home with the Liverpool art scene, and became a regular visitor at the Sandon studios

Horsfield wanted to develop his own work, so jumped at the opportunity to teach at the Liverpool College of Art. He taught both painting and art history. From 1960 to 1965 he was president of the Liverpool Academy, and in 1960 joined the committee of the Bluecoat Society.

Horsfield part-retired in 1977, in order to concentrate on painting, while continuing to teach life drawing at the College until 1982. During this time he worked from local motifs of the Crosby shore, moved by the shifting light and weather. He also took up etching and later transcriptions of old masters.