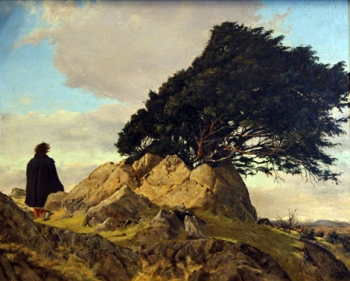 The Dalton-born artist, now 65, winner of a gold medal at the Paris Salon in 1975 was once an in-demand society portrait painter. When he mounted a retrospective exhibition in Grange in 1991, 3,500 people from all over the country went to see it.

Tom was born in Ulverston and grew up in Dalton, attending the former Green School, which is now Chequers Restaurant. When he left school he was apprenticed to Tyson’s the pork butcher. He attended night school in Barrow and one of his tutors in meat inspection class, who watched him draw the pieces of meat, told him he was too good for that job and he should be at art college.

He was offered a place at Lancaster and Morecambe College where he met the distinguished Lakeland artist Bernard Eyre-Walker and the two regularly went out painting and sketching in the fells.

He was a frequent exhibitor at the Royal Academy from 1970 and his acclaimed self-portrait against a bleak northern landscape titled The Petrel won him the Medaille d’Or (gold medal) in Paris, an achievement shared with only a handful of Englishmen, one of them being John Constable.

He lived in London until the end of the 70s, but then came back to Cumbria. He has painted in several different styles; one exhibition in Grange was all small still life’s of basic cookery ingredients such as eggs, lemons and tomatoes, another in Ulverston was landscapes